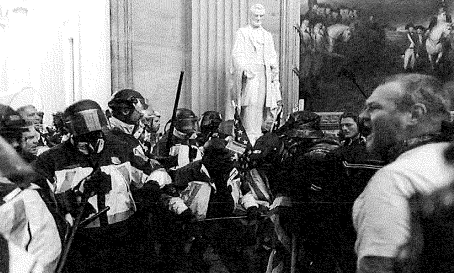 I believe it was the spring of 1864 in the closing tensions of that horrific "unCivil“ war that I had a momentary respite, a 17 year old spirited young lady by the name of Vinnie Ream made my acquaintance. She had such a bountiful energy and winsome smile that I could not deny her rather untimely request. She wanted to sculpt a statue of my likeness. If her effervescence had not so reminded me of my 11 year old son William, whose untimely death came 2 years before, I would certainly have deferred her request to a more appropriate time.

My fixed presence from this young girl's creative efforts, has been in the Capitol Rotunda these past 156 years. She did not do me justice, as I never did look that good even in better times. From battlefields filled with the carnage of slaughtered lives, to the sacred space of this place, I have gazed upon much. Too much. Believe it or not, your world and the world I occupied are not that different.

I witnessed first hand and know all too well the dangers of a nation hemorrhaging over divisions fueled by vitriolic language and foolish violence. There is so much more emotive fire than beneficent light provided in times such as these. When opposing sides cease to speak kindly and, most of all, cease listening openly, divisions will persist.

I look down from this unique vantage point, which has seen much, from somber moments of those laying in state, to the chaotic moments of your recent riots. With neither judgment nor anger but concern and deepest empathy, I humbly share these few but well furrowed words with you.

Our common enemy is not found among us but rather in our tendency to assume a righteous higher ground that can never be refined by the wisdom of those with opposing views. In our honest search for truth, we will always find that the broken nuanced nature of reality will necessitate that humility prevails over hubris. Perhaps the posture of the publican in the temple on his knees rather than that of the Pharisee proudly espousing his virtues is the only appropriate stance in which we can find meaningful dialogue. As I often said, “I have been driven many times upon my knees by the overwhelming conviction that I had no where else to go." This side of heaven we must often sacrifice our right to be right to the only One who is. Personally, I have found that my honest pursuit of truth seldom just affirms and pats me on the back but includes a nudge and very often a swift kick to my backside.

Let me share with you just two of many examples that show this nuanced nature of life and, therefore, the absolute necessity to hear all sides. I have heard much about how faith prevails over fear in such instances as not wearing a mask in your pandemic. If this faith can overrule such protective behavior where does that same logic go in faith not to carry a firearm? And as we are reminded of the large numbers of lives taken by this terrible pandemic each day, who is being the voice of those hundreds of thousands each year who are taken before ever having a voice? What of those half million children under five years of age who die each year for lack of clean drinking water? These are either numbers that ultimately do not matter or each one matters ultimately. The sanctity of human life either is for all or for none, and when one is diminished, all are diminished in its wake. I share this in all humility to encourage your hearts and minds to realize that easy answers should always be feared and prayerful consideration for all aspects of life need be a necessary precursor to any wise decision. We must seek direction from the moral compass, as we follow His higher expectations and precepts.

Though your times are similar to mine, yours are also quite uniquely different as well. Your capabilities, in so many ways as well as your potential to change lives today was absolutely unthinkable 150 years ago, but with that potential also comes the unprecedented, dangerous capability to obliterate all of life on the planet. The antithesis of such annihilation is that you also have at your disposal the remarkable potential to positively affect each person on earth, with these two opposites hanging in the balance, it is more important now than ever before in any epoch of civilization for you to have compassionate cooperation. You see, your decisions today, however made, will have implications, unlike any before, for life to survive and thrive. You do not have the luxury of time to delay nor the haste to err. History can only repeat itself so many times before even it too runs out.

Once again, I share all of this in the utmost care. Though statues have not faired well of late, I trust that you will realize that, like others before me, the credible word we have to share to the world is not in our perfection but as often in our brokenness. Wisdom uses both good and bad as her tutor. Leave the judging to the only one who has nothing more to learn.

Whether or not you as a nation, decide to wear this mantle of responsibility on your shoulders, it is indeed present. The world both watches and counts on you to be a bastion of leadership and a protector of human freedoms and life. Your example will lead, no matter the path, you decide to take, nor your willingness to accept this overwhelming task. Imagine with me if all the energies used to sustain global division and autonomy were focused and united on a common effort to make life better for each and every human on the planet.

Imagine if a common global initiative was created to eradicate poverty and ensure that each and every life mattered. This world has the ability, just not the will, to do this...yet. Future generations would look back on you to celebrate a renaissance of compassion and care as yet never before seen. World leaders might well be surprised as to how such a sacrificial, selfless endeavor would resonate and be embraced by their constituents since being part of something larger than ourselves and our time is what it means to be fully human.

You see this responsibility to do what is right and best is not just on a United States of America but upon a whole world. This generation is the last, best possibility for truth and life to prevail. My gaze will never change, always fixed, only forward to a bright future where honesty and integrity will have the last and loudest word. You have a great mission which can mold and shape the future of civilization like none before you. If your pursuit is true, it will always be bigger than yourself and far outlast your own limited time here.

If accepted, I see nothing but a bright future ahead. Humbly and always yours for the ages,