NEWS ALERT No In Person Service Due to Weather 01/16 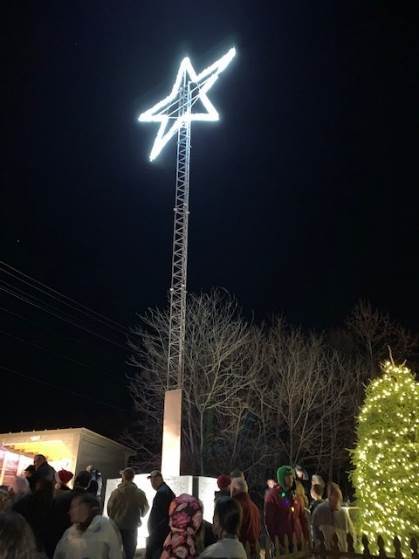 The Bethlehem, North Carolina Star has undergone many challenges during the 45-year history that began in 1977. During these 45 years, the star changed location, was destroyed by an EF2 tornado, and rebuilt by community citizens, supported hope for passage of the Covid pandemic, and serves  as a signal of hope for those who lost loved ones and all who suffered the ravages of the disease.

The Beginnings of the Bethlehem NC Star

Every community seeks a special identification of their roots and principles. Communities are known as gateways, home of celebrities, friendly places, for geographic features, or unique features. The Bethlehem Community’s uniqueness is tied to being one of the towns, cities, or areas with the name Bethlehem. During the Christmas season, many wayward sons and daughters of the community who have sought fame and fortune in other places return to their roots. People still seek homecomings around holidays, return home to plan the care of older parents, and to inculcate their children to the roots of their own beginnings.

How did we get the Star of Bethlehem, NC?

Since 1977, the Star of Bethlehem, NC has been there to greet travelers  on their return home during the month of December. The Bethlehem Star, although a strong religious symbol, is also a greeting to all who choose to visit. The Bethlehem Star began after a discussion by members of the Bethlehem Community Development Association. Almost all these individuals are no longer with us, but their idea of reading the story in Matthew and singing carols has persevered through storm and pestilence. Thus, a locally planned and built star placed on a telephone pole in an open  field began and has been continued as local citizens have taken leadership roles in continuing the tradition of our Star.

The first star lighting was held in December 1977 with music by the  Singing Linebargers, an honored community resident flipping the electrical switch as the story in Matthew was read, and attendees gathered around bon fires. Local churches provided the characters for the nativity scene. In recent years, church choirs and individual vocalists have provided the music, boy and girl scouts have served hot chocolate and delivered programs, the local fire department has maintained traffic, and the Ministerial Association has led the planning.

Several years ago, the Star’s electrical wiring became very outdated and in need of repairs. One of the lots that served as a location for the Star was sold for construction of a business. Mt Pisgah Lutheran Church agreed to serve as the new location for a new Bethlehem Star. A local Boy Scout constructed a new manger scene as part of his Eagle Scout project.

A major tornado blew through Bethlehem doing severe damage to homes, trees, etc. One of the casualties of this tornado was the Bethlehem Star. The loss of the star was devastating to residents who conducted a makeshift star lighting on Christmas, 2017 with a miniature star on a short pole.Through the efforts of the Bethlehem Ministerial Association and a Star Committee of volunteers, community citizens came together to involve all groups in the community to rebuild the community symbol. The outcome was significant with planning, organizing, and conducting a plan for replacement of  the star. The Raise the Star committee enlisted the help of Carpenter Decorating to construct a new star at cost. The first contributor was an 8-year-old girl who handed Pastor Mike Stone some coins to do her part in having a new Bethlehem Star. The fund-raising campaign was underway. A goal of $$15,000 was set with a request for organizations, churches, and individuals to plan activities to raise money for the project. Multiple BBQs were held by churches and clubs,  pieces of the old star was cut, and made into Christmas ornaments, Christmas trees were sold, etc. One of the smallest churches in the community gave $1,000, several retirees chose to give IRA distributions,  community businesses gave money, and children had their own projects. .    A local excavating company provided heavy equipment to dig the hole for the concrete, a small concrete pouring company gave their services, a local brick mason gave his services free, a local electrical company provided their services, Children decorated ornaments to sell, a local wood worker cut, polished and lettered stars for distribution, the local newspaper, The Bethlehem Star (what else would it be named)  provided free advertising space. The committee created an information pamphlet and donation form that was distributed throughout the community. The money outcome was over $35,000  plus which not only paid for the new star and its upkeep for several years, but also provided additional  funding to the local Ministerial Association’s fund for unchurched needy citizens.

As the COVID-19 pandemic unfolded  and schools, activities, and gatherings were  canceled, religious leaders struggled to support their church families as services, weddings, even funerals and memorial services were canceled or postponed.Pastor Mike Stone of Mt. Pisgah Lutheran Church  was concerned about the alarming trend of the COVID-19 virus. He said that he could not help but smile when he saw people putting up Christmas lights during this challenging dark time. “We are Easter people of Hope because we know Jesus the Light and Love of the world.” With this in mind,  he proposed to the Bethlehem Ministerial Association and the Bethlehem Star Committee  to re-light the star. The proposal was well-received, and a letter was written to the community which stated that Christians believe in showing symbols of their faith in times of crisis. The message was that the Bethlehem Star will shine as a symbol of hope and will clarify  that whatever may threaten us, God is bigger and provides his peace through the message shown through the Star.

Support for Families of Those Lost to Covid

The Bethlehem Star has continued to shine during the challenges of the Covid pandemic and served as a beacon of hope and comfort since March 21, 2020. Hopefully, the return of the annual Bethlehem Star Lighting event on December 4 will mark a transition to a more normal lifestyle. The Annual Bethlehem Star Lighting activity will have two themes this year- remembering those in our community lost during the pandemic and celebrating the hope and joy given by the Christ child as the Bethlehem Star is relighted. The program will begin at 7:00 p.m. on December 4 at the pavilion and bandstand at Mt. Pisgah Lutheran Church in Bethlehem.A special video  of the days leading up to the birth of Christ and a performance of the ACHS stage band will precede the remembrance activities. The remembrance will include the reading of the name of the deceased person, a ringing of a large bell by boy and girl scouts in their  memory, and acknowledgement of the families through the presentation of a miniature cross. Committee representatives ask that a family member of a person to be remembered please call the church office at (828) 495- 8251 to say whether someone from the family will be in attendance.

Following the remembrance segment of the program, attendees will be asked to move to the area under the Star for the remainder of the activities. Once attendees are settled under the star around bonfires, the program will continue with the reading of the Christmas scripture by Pastor Bill Honeycutt, singing of Christmas carols led by local artists, singing of the song, “Beautiful Star of Bethlehem,” enjoyment of a live nativity, and the lighting of the Bethlehem Star by local resident David Lail. Local volunteer organizations such as boy scouts, girl scouts, church youth, ministers, Bethlehem Fire Department,  Ruritan Club, and others will also assist.The Bethlehem Ministerial Association and Bethlehem Star Committee look forward to returning to the traditional program held in Bethlehem to celebrate the meaning of the Star and the Christmas season.Event organizers  say thousands have attended the star lighting during the 45-year history including celebrities who chose to stay in the background. Each person who returns home for the holidays does so with either real or imagined schemas of their early years. Hopefully, the community of Bethlehem helps these travelers become re-introduced to their early years. It is a very settling experience to drive North on NC Highway 127 across Lake Hickory to see the Bethlehem Star shining as it welcomes visitors and wayward sons and daughters’ home for the holidays.

The Bethlehem Star will be lighted this year by David Lail, a 67-year-old resident of the Bethlehem Community. Son of Dexter and Mary Lail,  he lives with his sister Joyce Lail. David was born with disabilities that were life threatening. His first surgery was at one-month of age. He spent considerable time with special schooling and training not only in his home but also at orthopedic hospitals. For 36 years David has been fortunate to attend the Alexander Opportunities program each day of the week.

As a member of Bethlehem Church of God with an 18-year perfect attendance record, he is known as “Super Dave” by the congregation and many in the community. He loves going to church, going to Alexander Opportunities, sitting on his front porch listening to music, and waving happily as people pass by his home.

According to Pastor Stewart Lankford, “ David is a prime example of Jesus’s love of all of his children. Even though  he was not expected to live, his determination to overcome many obstacles has made him an admired citizen in our church and the Bethlehem Community.”  David was selected to light the star because of his self-determination and personal understanding of the meaning represented by the Bethlehem Star as it serves as a shining example of hope for all who see it.

Want to Attend the Star Lighting

The Star is located on the campus of Mt. Pisgah Lutheran Church at 9379 NC Highway 127 just North of the Bethlehem Shopping Center in Bethlehem. The program begins at 7:00 p.m. at the pavilion and bandstand of the church and will continue with traditional activities in the field under the Star after the Remembrance phase of the program. Come join in the festivities with the high school band, songs by local artists, scripture, bonfires, hot chocolate, carol singing, live nativity, etc. It is also  a show of support for those who have lost loved ones as well as all those medical, service, education and others who have helped citizens hopefully through the worst of the pandemic.

No In Person Service Due to Weather 01/16

A Different kind of Epiphany